What Is Plating Technology? 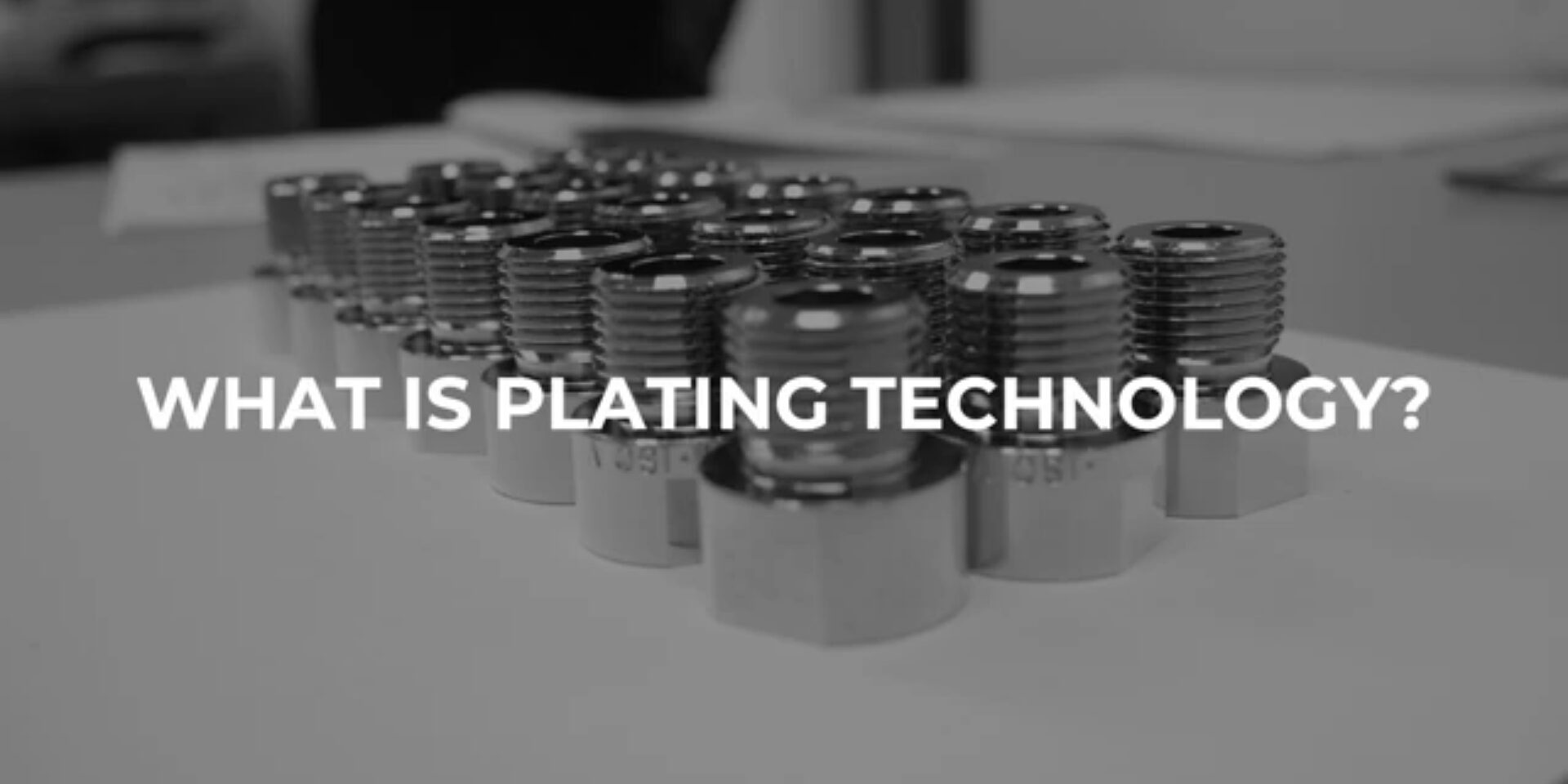 A: Plating technology is the use of processes that use chemicals to put a coating on different types of metal. Coatings such as copper, nickel, gold, silver—and other types of materials.

You may not realize it but you come across plating technology every day—some you see, some you don’t see. Everything from plumbing fixtures, to cabinet hardware, automotive parts—even the device you’re reading this on, all incorporate plating technology.

The plating process is a process during manufacturing that coats or bonds a layer of metal onto other metals. Plating technology and its uses add a wide array of benefits to the products it’s used on. Most metal plating is performed using the electroplating process which uses electric current to plate. There is also a similar process—electroless plating which is a chemical-based process that doesn’t use external power. We’ll get to the processes in a moment as well as a few others.

Metal plating technology is useful in many different industries and as mentioned, offers many benefits such as:

What Metals Are Used In Plating Technology?

There many different metals used in plating technology and each has its unique benefits and applications. What conditions the objects you are plating will be used in, what they’ll be used for, will determine the coating. That being said, there are many metals you can use to coat, some of the most common metals used are:

Zinc is inexpensive and is used to give many metal objects a galvanized coating that improves rust and corrosion resistance.  It can be applied with electroplating—using an electric current, or by a process called Sherardizing. In this method, also called vapor or dry galvanizing, the metal object is heated to an extremely high temperature. Then it’s put into a hot tumbling drum with zinc dust and maybe a filler material such as sand.

The combination of heat, dust, and tumbling causes the zinc to evaporate, diffuse, and then bond to the object. This process is mainly limited to small objects with fine details such as screws, washers, and the like. It is advantageous because the process allows zinc coverage even in extremely fine crevices.

For larger items to be coated with zinc, they can be bathed in molten zinc. Sometimes aluminum or tin is added to reduce the viscosity of the molten zinc to it covers better.

Chromium plating, better known as chrome plating, is often used for purely decorative applications. Items such as wheels, faucets, car parts, and other objects use this kind of plating regularly for aesthetics. However, it also serves a functional purpose in that it improves hardness and corrosion resistance.   This makes it perfect for industrial environments where corrosion and wear might be an issue. In those applications, it’s referred to as hard chrome plating and is used to reinforce parts that have been worn down. Chrome plating is usually applied through electroplating using hexavalent chromium, but it can also be accomplished with Trivalent chromium.

Nickel is a popular metal for plating mainly because it is easy to apply through electroless plating. It is most often found on household items such as doorknobs, plumbing fixtures, cabinet hardware, and cutlery. It has excellent resistance to wear and adds a sophisticated muted metal aesthetic to home décor. Nickel is usually bonded to copper or aluminum but also works on a wide array of metals.

Speaking of electronics, gold is the crème de la crème for use in electronics, circuit boards, and other computer components. It is highly resistant to oxidation and its electrical conductivity is unrivaled. Gold plating is one of the easiest ways to give other metals the same characteristics. Outside of electronics gold is commonly used to create costume jewelry that looks like solid gold without the price.

Like gold, silver is used in applications that are for cosmetic appeal but also in applications for improved conductivity. It is cheaper than gold and pairs well with copper however there are some limitations that silver plating technology faces.

Silver can be susceptible to humidity and galvanic corrosion—it is not suited well for environments with high humidity. This is because silver is often prone to flaking off or cracking under such conditions and can expose the base metal.

Tin plated steel is a veteran in the packaging of food and beverages. It not only provides resistance to corrosion, but is also non-toxic, and welds/solders with ease. Tin plating is also used in other applications besides food and beverage. You can find it on paint cans to grease tins as well in construction. Tin plating technology almost exclusively uses the hot-dip process to plate. Tin is even employed in the manufacture of various electronic components as well.

There is also a tin-based plating technology known as terneplate which in the past used an alloy of tin and lead for corrosion resistance. However, due to the dangers now known, lead has been replaced with stainless steel. If this tin-stainless metal is painted and maintained properly, the metal can last upwards of 90 years making it ideal for tin roofing.

If you’ve ever bought sterling silver jewelry, you know it tends to tarnish easily. It may look like white gold but it doesn’t hold its shine well. Rhodium plating technology adds value to sterling silver and other metals used in jewelry production.

Rhodium is a form of platinum that not only boosts tarnish resistance, it also makes jewelry more scratch-resistant and lustrous. White gold, platinum, and copper are also metals that are popular for Rhodium plating.

Naturally, with any metal plating, Rhodium’s protective barrier will eventually rub off with extensive wear after a few years. This will lead to discoloration of the jewelry which can be corrected with a repeat plating of Rhodium.

As mentioned earlier, there are several techniques involved in plating technology. The most common are electroplating and electroless, however, there are others.

Electroplating is the most often used technique for plating and uses electricity to plate. Using an electrical current, metal particles with a positive charge are dissolved in a chemical bath. Since the metal particles are positively charged, they cling to the negatively charged metal that’s being placed in the bath.

Electroplating delivers a quick and even coating that gives a base metal a protective coating, cosmetic enhancement, or changes its properties. This process betters the physical, chemical, and mechanical properties of the object it is used on. This betterment can build the piece up in size, make it easier to form or increase solderability or conductivity in its application.

Electroless plating gets its name from the fact that it does not employ electricity to complete the plating process. Instead, it uses a reaction of chemicals that causes metal atom reduction. In plain English, metal particles are mixed with a reduction agent. Those particles are introduced to the metal and triggers a catalytic reaction. That reaction bonds the particles to the metal resulting in a solid layer of metal plating.

This method is versatile and can be used for materials of all shapes and sizes. Since it doesn’t need external electricity or plating baths, it also costs less. However, it should be noted that electroless plating technology is a slower process. It also can only create thin plates and is more complicated to control.

Immersion plating is exactly what it sounds like—immersing one metal into a solution of particles of a nobler metal.  A noble metal is a metal that natively resists oxidation and corrosion—gold, platinum, palladium, and silver are examples. When you immerse a less noble metal such as copper into a solution of silver, for example, it plates it. It does this because the particles from the nobler metal are more stable and therefore drawn to the base metal. This reason creates the same bond as electroless but is a slower process. Once the thin layer of plating has occurred, the process stops on its own. It should also be noted, that immersion plating struggles with adhesion quality compared to electroplating.

Guerrero Plating Technology Can Help You

When you need the highest quality plating for your components, Guerrero has you covered. We have over two decades of combined experience in the plating industry. Our focus is on large scale batches of small components with consistent quality. Contact us today to see what we can do for you!

What Are The Benefits Of Plating Technology?
January 20, 2021